Recent reports have implicated the p53 tumor suppressor in the regulation of lipid metabolism. We hypothesized that the pharmacological activation of p53 with low-dose doxorubicin, which is widely used to treat several types of cancer, may have beneficial effects on nonalcoholic fatty liver disease (NAFLD) and nonalcoholic steatohepatitis (NASH). 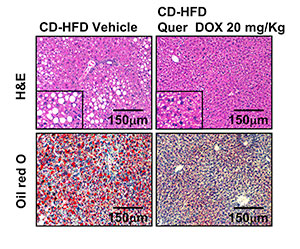 We used long-term pharmacological activation of p53 by i.p. or oral administration of low-dose doxorubicin in different animal models of NAFLD (high fat diet containing 45% and 60% kcal fat) and NASH (methionine- and choline-deficient diet and choline deficiency combined with high fat diet). We also administered doxorubicin in mice lacking p53 in the liver and in two human hepatic cells lines (HepG2 and THLE2).

The attenuation of liver damage was accompanied by the stimulation of fatty acid oxidation and decrease of lipogenesis, inflammation, and ER stress. The effects of doxorubicin were abrogated in mice with liver-specific ablation of p53. Finally, the effects of doxorubicin on lipid metabolism found in animal models were also present in two human hepatic cells lines, in which the drug stimulated fatty acid oxidation and inhibited de novo lipogenesis at doses that did not cause changes in apoptosis or cell viability.